Function of the Spine

The disc is sandwiched between the vertebral bodies. It consists of a thick outer rim, similar to a rubber in a tyre called the annulus. There is a gelatinous inner portion called the nucleus pulposis forming a donut like structure. The disc is not a shock absorber as it is often quoted. Its main aim is to allow the two vertebrae above and below to move in multiple planes but not to glide or shear across each other. Disc failure is a major cause of two vertebrae ‘slipping’ over one another.

The sacrum is made up of 5 fused vertebrae making one large bone. There are some rudimentary bones attached at the bottom called the coccyx. The sacrum is a keystone shaping, sitting between the two iliac bones, which make up the pelvic ring. The sacrum, like the thoracic spine is in kyphosis.

The neck consists of 7 vertebrae. These are labelled C1 to C7. C1 and 2 have an extremely complex structure and account for nearly half of all the movement in the neck. The neck is curved into lordosis (backwards). There are smaller extra joins on the side called the uncovertebral joints. C1 to C6 also have a channel to carry the vertebral artery to the brain on either side. The nerves that exit within the cervical spine supply the hands and the breathing muscles.

The spine is stable if it can carry out its functions so that under normal day-to-day loads it does not cause pain, deform or cause damage to the cord or the nerve roots.

This stability is maintained by the complex geometry of the bones and joint surfaces. Under normal loads, the muscles help maintain this stable balance. Under extremes of load, the strong ligaments take up this role. The strength, endurance and control of these ‘core’ muscles is essential for a normal spine.

The thoracic spine is made up of 12 vertebrae labelled T1 to T12. The ribs are attached to all 12 vertebrae making this segment stiff, but allowing rotation. The bones gradually get bigger as you go down, reflecting the increasing loads that each level has to carry. The discs are frequently small in the thoracic spine that is usually curved forwards or Kyphosis. The spinal cord is carried within the thoracic spine, giving off 12 sets of nerve roots that travel along with each rib.

The Spinal Column is made up of four distinct areas: Cervical (neck), Thoracic (mid-back or spinal part of the rib cage), Lumbar (low back) and Sacral (bottom). 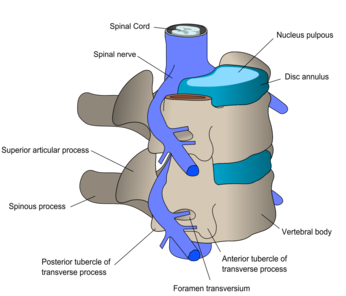 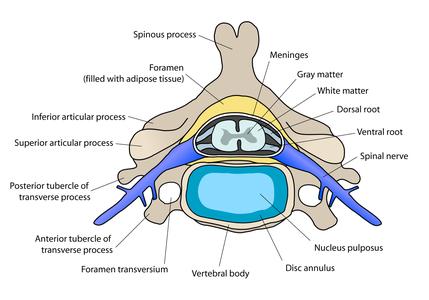 The functions of the spine including protecting the spinal cord that is inside the canal and all the nerves. It also provides stability and balance by supporting the neck and providing an upright position. The spine moves in an intricate fashion to allow us to walk on two legs in a reciprocating manner as well as by providing attachment to muscles and the limbs. The spinal column is also full of bone marrow where blood cells can be formed as well as a major storage point for numerous nutrients essential for life. 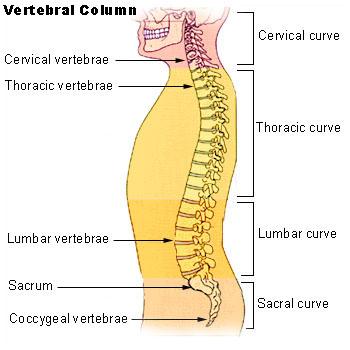 The vertebrae are the building blocks of the spine. They change in shape within each part of the spine reflecting the loads they have to carry and their intricate function at each level. The vertebrae have multiple bony protrusions that form processes for the attachment of muscles and ligaments including the transverse processes and the spinous process at the back (the bumps that can be felt in the middle of the back). There is a large body at the front, which joins with the vertebra above and below along with intervertebral discs sandwiched in between. There are two bony bars that come out of the back called the pedicles that join with the lamina at the back, forming a canal inside which the spinal cord sits. At the back, each vertebra forms two joints with the vertebra above and two joints with the one below, thereby forming a tripod like structure; with the discs at the front and facet joints at the back.